Create a [Worker Bot] and put it into play.

Transform target Worker Bot you control into a [War Bot].

Transform target War Bot you control into a [War Hulk]. 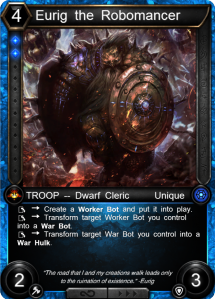 Soon after they are crafted, all dwarves are required to choose a specialization dictated by one of the guilds of the Builder’s Triad. Eurig was immediately drawn to the Construct Guild, a consortium of engineers dedicated to crafting and refining autonomous machines of destruction. Most bot-makers prefer to view their creations as senseless apparatus, walking tools that are programmed for various functions but are incapable of making their own decisions or having an awareness beyond their coding. Eurig believes this kind of thinking is regressive and demeaning.

If dwarves, who are crafted from stone, are self-aware and capable of independent thought, then why can’t robots, forged of metal, be capable of consciousness as well? Eurig gives each of the bots he creates a name, for he believes that identity is the foundation of self-awareness. He speaks to them as if they were equals. Though the responses they give are pre-programmed, Eurig argues, isn’t that the way all sentient beings respond to stimuli? Robots understand cause and effect, have a sense of self preservation, and are capable of making contextual choices based on a combination of predetermined options and learned behavior.

Eurig is an evangelist amongst a small but growing order of dwarves, known as the Amalgam, who believe that dwarves are a primordial version of their race. The Amalgam preach that dwarves were specifically designed for the primary purpose of creating robot kind, and that eventually, robots will become the dominant species of the planet. At that time, dwarves will merge their consciousness with robots. These hybrid dwarf-bots will be more powerful than any mortal race that has ever existed, and will challenge even the Primals for dominion over all existence. While the official determination of the Builder’s Triad is that the beliefs of Eurig and the Amalgam are inexplicable and bordering on treasonous, they have yet to officially sanction the group or oppress the distribution of their teachings.